The must-have features when buying a newborn pram

What's the best pram for a newborn baby?

Buying a pram for a newborn can be a confusing exercise, and as a first-time parent, it’s normal to have a lot of questions. How do car capsules work and what is a travel system? What’s the difference between a convertible and a standalone bassinet? Can I put a newborn in a stroller seat?

We hear your questions, and we’ve got you covered! Read on for our comprehensive guide to buying a pram for your newborn.

The unique needs of newborns

The first point of call is to make yourself familiar with the unique needs of a newborn baby. The consensus among health professionals is that newborns should spend as much time as possible lying flat on their back. This is the optimal position for both spinal and muscle development, while ensuring that their airways remain open and unrestricted.

Why pram bassinets are essential for newborns

Experts recommend the use of bassinets for babies less than 6 months old as the safest travel option for their development and safety.

Unless the seat reclines fully to a 180 degree flat surface, it is not recommended to use a stroller seat with your newborn.Many stroller seats rotate the entire seat frame to recline. The risk with putting a young baby in a seat is that their back becomes curved with legs up and neck tilted forward.This can restrict the amount of oxygen they're getting and can be quite dangerous, hence why the Australian safety standards now require companies to advertise these types of stroller seats as “for use from 6 months plus".

We recommend they remain in the bassinet until they can sit up unaided and support their head and neck. 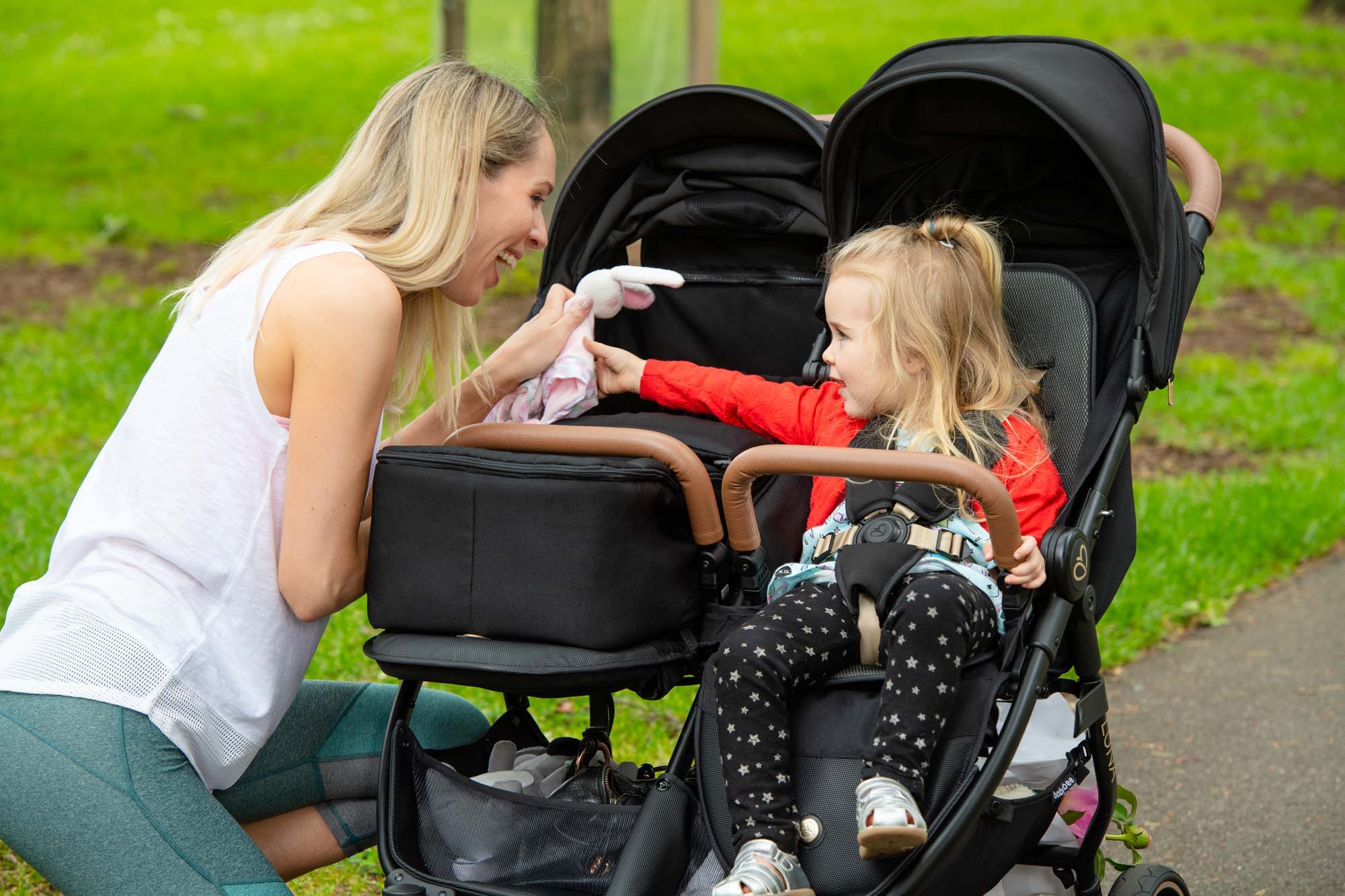 The exception to this is where the seat reclines by hinging from the seat base, to create a flat-bed environment. The Babybee Luna is a great example of a double or twin pram with side-by-side seats that fully recline and are approved for safe use with newborns.

Generally you’ll want to use a cocoon or newborn insert with this type of seat to ensure there is no risk of falling and create a nice snug space you’re your precious cargo.You’ll need to be certain that these are baby-safe products that comply with safe sleeping regulations to avoid SIUD. Red Nose list important considerations around safe infant sleep products here.

When can I transition from bassinet to stroller seat?

It’s not recommended that a newborn sit upright in a regular seat, until they are able to sit and support their own head, unaided. This is to prevent their head falling forward which can potentially block (or partially block) off their airways. This is generally around the 6 month mark but can vary greatly from child to child and is ultimately at your own discretion.

Can I use a car capsule instead of a bassinet?

A great feature of most prams is the ability to connect a compatible car capsule. Prams that can incorporate both a regular stroller seat and a car capsule are called travel systems and are extremely versatile prams, allowing parents to easily transport their newborn from the car to the pram.

Capsules are fundamentally an infant car seat for babies less than six months, with a carry handle that allows you to take bub straight from the car onto the pram, without disturbing them.They’re great for quick trips out and about (picking up older siblings from kindy or school or picking up that bottle of milk you realised you need asap!), but are not designed for prolonged use.

As this article from Dr Jane Williams outlines, extensive research shows that capsules can be dangerous when used for longer periods or outside of the car for sleeping. So if you plan on taking log, leisurely strolls with your bub, make sure you’re moving them into the bassinet or fully reclined stroller seat.

What's the difference between convertible and stand-alone bassinets?

A convertible seat/bassinet (sometimes referred to as a 2-in-1 pram) simply means that the bassinet can convert into a stroller seat (and vice versa). This then clips into the lower half of the pram.

A standalone bassinet is just that – stand alone. It is built with its own frame and is independent of the stroller seat. Both can clip onto the lower half of the pram frame and stay intact when you’re not using them. This becomes extremely useful with multiple children, when you are swapping between the bassinet and stroller seat more regularly. 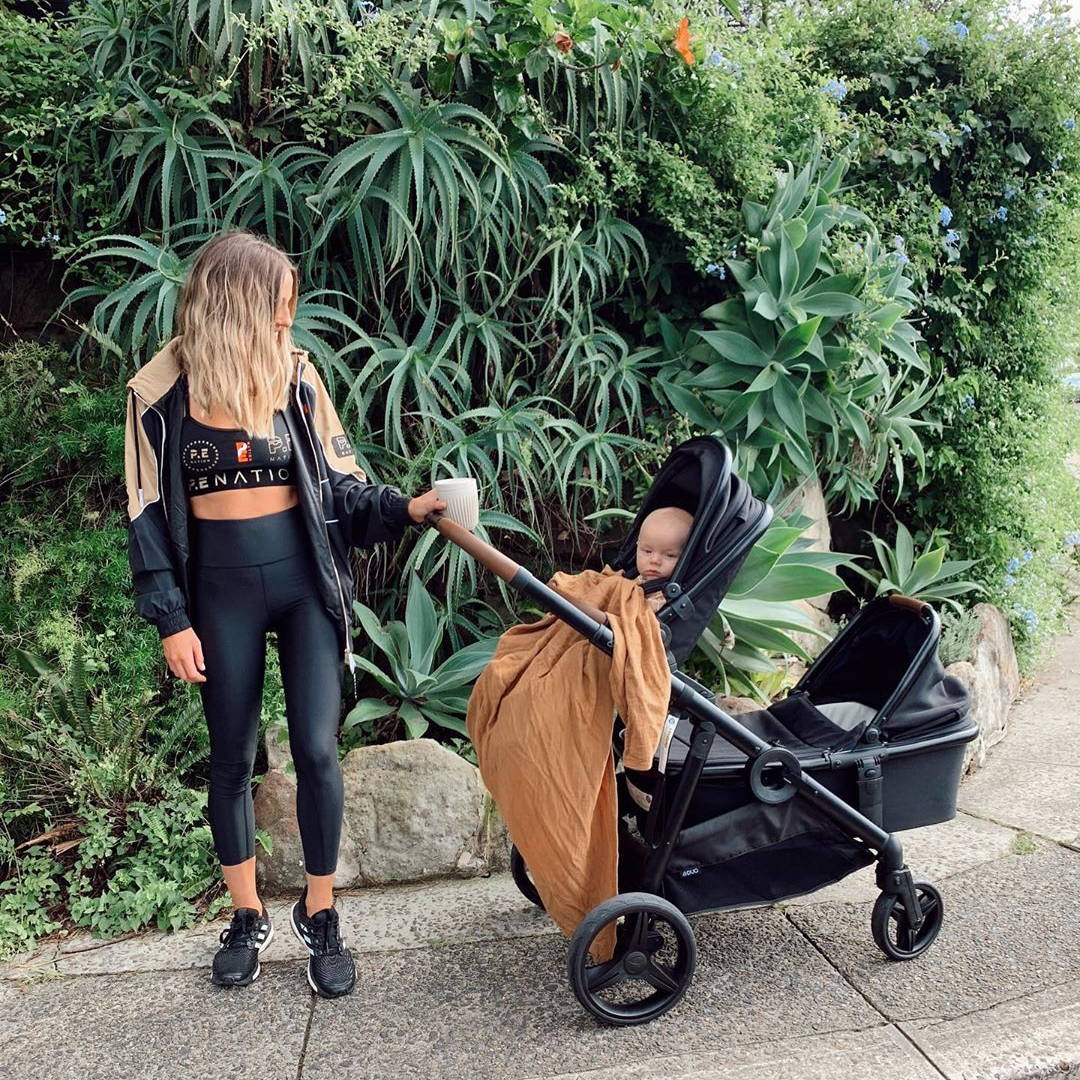 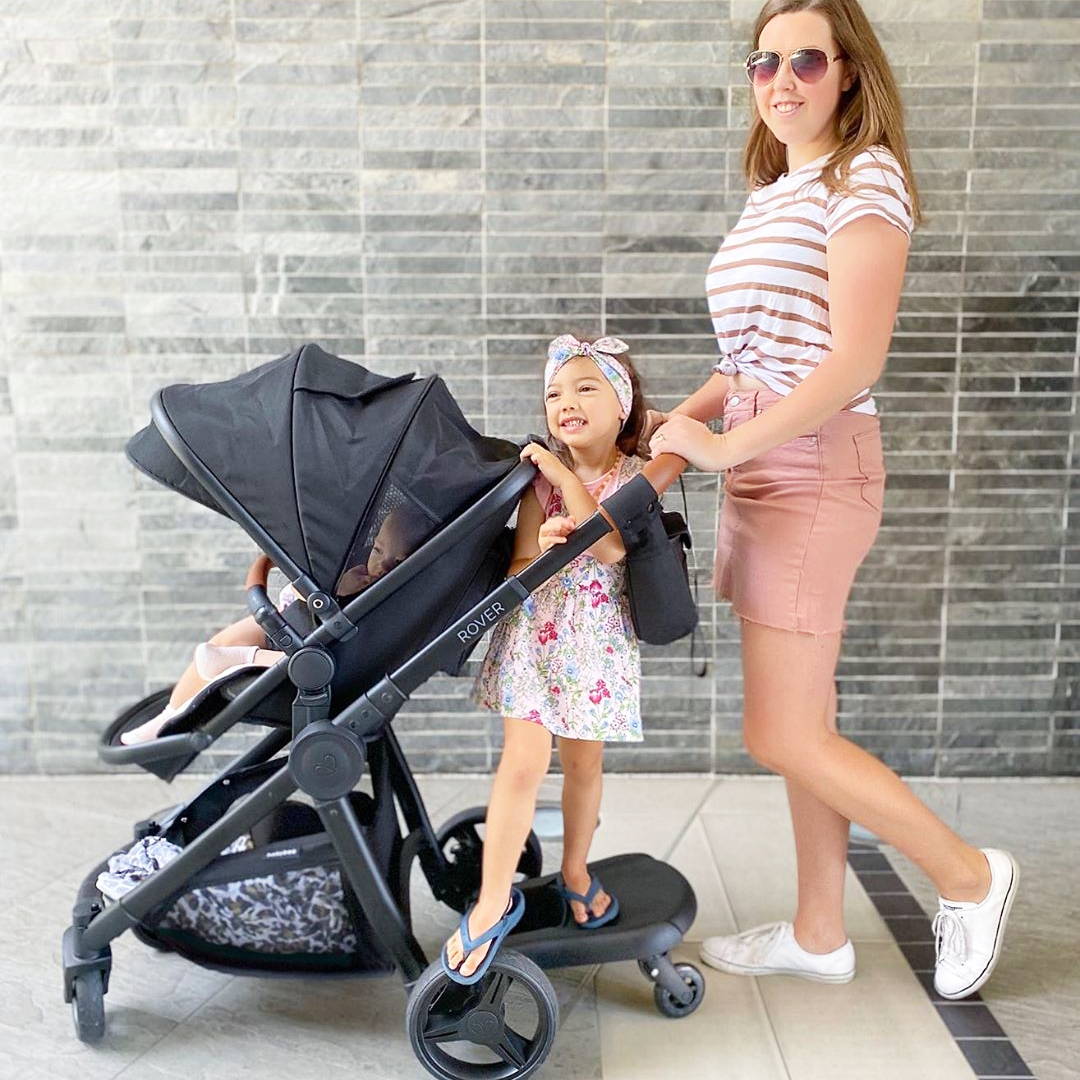 Another thing to consider when buying your first pram is planning for the future.

Some 2-in-1 prams will have the ability to convert into a double pram to accommodate a second child.One thing to think about is the gap you plan on having between children, as many of these convertible tandems only provide a smaller “rumble seat” option that’s not going to last very long for use with two as they grow. The Babybee DUO2 has one of the largest toddler seats in the tandem pram market and is perfect for those wanting the ability to safety transport both a newborn and a toddler with ease,

Another option for a newborn and toddler is to use a toddler board (sometimes called a skateboard or buggy board), where the older child stands behind the pram on an attached board.For some more info on prams that can accommodate two children, check out our guide to buying a double pram here.

Buying your first pram for a newborn doesn’t have to be daunting! For more information, check out our handy Pram Buying Guide for everything you need to know before you buy.

If you have any questions about buying a pram for your new baby (or anything at all) email us at hello@babybeeprams.com.au.

Our team of Customer Service Mums are here to help and we’ve never heard a silly question!

Ask Babybee: What’s the difference between a pram, a stroller and a travel system?